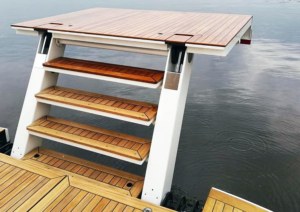 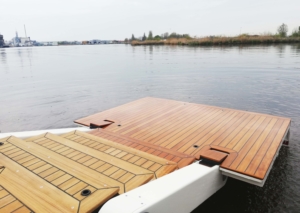 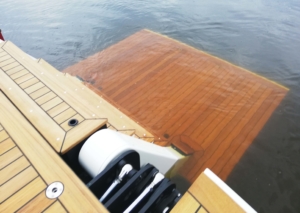 The Seascape is a hydraulically moving bathing platform for superyachts and cruise ships. The bathing platform is based on a Z-shaped movement and is produced in several sizes with optional variables. This way, Hydromar is able to engineer and produce the to the yacht’s requirements in accordance with the yard. The unique crankshaft mechanism in the stair booms, takes care of a major boost to the stability of the steps and platform. It has two sets of cylinders which drive the unique crankshaft system. The platform is always delivered with a complete and tailored platform.

The Seascape’s upper platform has integrated break safety pins to deal with the critical loads caused by excessively large waves hitting from below. The integrated breaking mechanism can be replaced by the crew in case such a wave has struck the platform. The Seascape can be used and restored even if the breaking mechanism has not been repaired. We created a reliable bathing platform this way, that won’t be damaged beyond repair due to a too high sea state.

The first test model was shown during the Monaco Yacht Show in 2014. At the end of 2016, the first orders were placed and from mid-2017, the first Seascapes were delivered to the shipyards. At this year’s Monaco Yacht Show Hydromar will explain their latest developments in the Seascape range with four sizes and more add on possibilities for the convenience of the users.

Hydromar delivered the first Seascape bathing platform to Echo Yachts around the middle of 2017. It concerned a model SSC-2 with seven self-inclining steps and a medium-large platform measuring (LxW) 2.5 x 2.0m. Hydromar was asked to supply three Seascapes for the largest trimaran in the world, the White Rabbit, built by Echo Yachts. This trimaran superyacht was launched at the beginning of September 2018, to subsequently start her sea-trials. Now she is sailing the world with one Seascape in use as a swimming platform at the back of the centre hull, while the other two Seascapes serve as bridges, connecting the two outer hulls to the middle one.

The next Seascape to be delivered followed shortly after that: from November 2017 the first of four XXL platforms was delivered to shipbuilder VARD. They built four new expedition ships (luxury cruise line explorers) for Ponant and Hydromar has been asked to supply XXL platforms for each one. Cruiseliners with names as La Lapérouse and Le Bougainville are now cruising the world over with an impressive Seascape at the aft of the ship. As of now Hydromar delivered 4 Seascapes to VARD. After the first sea trials of Le Lapérouse, Hydromar was asked to supply 2 more of these platforms, the latest two platforms are currently being built.

In September 2018, Hydromar and its staff were guests on board of Le Lapérouse, which was made possible by the hospitality of Ponant and the crew on board. The crew set the Seascape in motion for us, so we could have a first-hand experience of just how powerful and imposing this XXL Seascape is. At the same time, the crew were able to tell us about their experiences while working with the Seascape.

That the market was waiting for a platform such as the Seascape, is clear. Not only shipyards in Norway and Australia were interested in the Seascape. Hydromar also built platforms for several Dutch shipyards, a German and an American yard and recently for the United Arab Emirates. Hydromar is very pleased with this development!

Shipyards, designers or naval architects that would like further information or discuss the use of a bathing platform may contact Rob Montijn +31 (0)88 45 70 430 of sales@hydromar.nl.