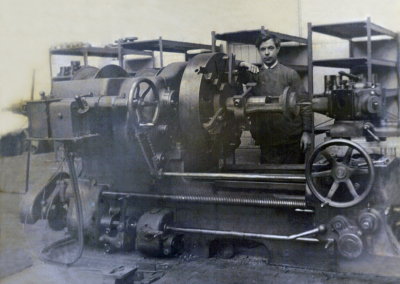 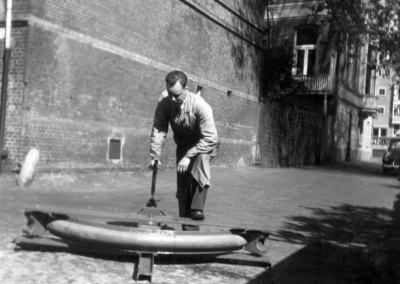 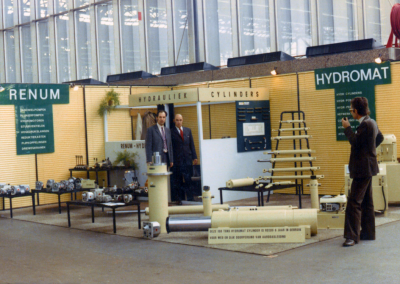 Booth in the 70s with Van der Velden Brothers 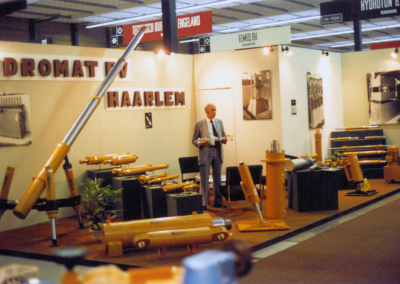 It’s 1928: the third industrial revolution had taken place, marked by the invention of new ways of communication. Also the first flight with the airship Graf Zeppelin was made, the biggest zeppelin build until then. And it’s the same year Mr. Adriaan van der Velden started a company: Machinefabriek A. van der Velden.

Hydromar was created as a machining company in central Haarlem in 1928. It’s founder, Mr. Adriaan van der Velden, was a progressive man always on the lookout for new approaches. In that days the company was named Machinefabriek A. van der Velden. In 1961 Adriaan passed away. Also in 1961 the company moved to an industrial estate outside of Haarlem. By then Adriaan’s sons Gerrit and Rindert van der Velden had taken over the operation of the company.
As part of their continuous search for new products, the Van der Velden brothers started experimenting with hydraulic steering cylinders and hydraulic thrusters for their own inland boats. In these days the brothers changed the name of the company to Hydromat (hydraulic materials).

In the seventies Hydromat attended many shows. At the pictures amongst others Gerrit van der Velden at the booth of Hydromat.